Ever since diamonds were first started to be polished, presumably during the late 1300's and 1400's, diamond artisans have attempted to maximize diamond's ability to reflect and refract light. Early cutting methods and designs were limited by technology, and it is only in the last century that diamond cutting has been so thoroughly researched that an objective cut grade has been able to be assigned to diamonds.

The cut of a diamond determines its brilliance or sparkle. Each shape will be cut differently. Before a diamond is cut, the location of inclusions and flaws, the natural coloration, and the original shape of the rough stone are studied extensively. The stone facets are then mapped out and cut in a way that maximizes size, shape, and clarity.

Diamond bends light (refracts) at a very specific angle. The objective of diamond cutting is to return light to the viewer, and to do this the angles of the facets must be strictly adhered to, to maximize how much of that light is returned. For optimal light performance, you want a diamond that is cut neither too shallow nor too deep.

But that is the simple view. It turns out that there is so much more that goes into cutting a diamond to perfection. To reach perfection you need to read on to understand why even trained gemologists are still learning. 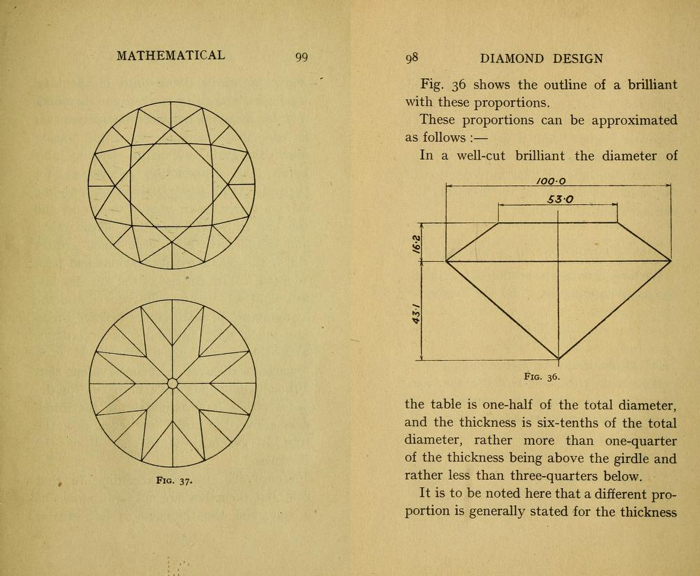 "Old-mine cut" to a form that we would today recognize as a round brilliant diamond. Technology allowed diamonds to be rounded to a near perfect round form and faceting equipment was being used by skilled cutters to produce diamonds that unlocked diamonds ability to shine.

In 1919, master cutter Marcel Tolkowsky penned a book titled "Diamond Design". Very carefully he outlined his research into how light interacted with various angled facets, and proposed that he had unlocked the perfect set of proportions for diamond cutting.

We may thus say that in the present-day, well-cut brilliant, perfection is practically reached: the high-class brilliant is cut as near the theoretic values as is possible in practice, and gives a magnificent brilliancy to the diamond.

That some new shape will be evolved which will cause even greater fire and life than the brilliant is, of course, always possible, but it appears very doubtful, and it seems likely that the brilliant will be supreme for, at any rate, a long time yet.

The Tolkowsky brilliant, as it came to be known, became an early ideal for diamond cutters to cut their diamonds to. His legacy endures to this day, with diamonds being sold that meet the parameters he had outlined.

The Tolkowsky brilliant became especially popular in the United States where the design became known as the American Ideal Cut. This became firmly established when in the 1950's the American Gem Society (AGS) used the proportion set as the basis for it's diamond cut grade. To it's membership, diamond graders were provided a set of proportion tolerance ranges that allowed every round brilliant cut diamond to be assessed for cut grade. A number scale of 0 to 10 was established.

As important as this development was to the science of diamond cutting, The assessment of cut grade remained a side note for most of the diamond industry. Ideal cut diamonds were exclusive and generally only available through AGS jewelers. It was only with the establishment of the AGS Laboratory in 1996 that consumers could generally purchase diamonds that had been graded as AGS Ideal cuts.

Other grading labs refrained from assessing the cut quality of diamonds. The leading grading lab, GIA, only began adding cut and proportion information in 2006. This new grading system

At the same time AGS launched a whole new diamond cut grade system that has revolutionized the way we understand light interaction with the diamond. Today the two cut grading systems stand alongside each other as reliable tools to gauge how well a diamond is fashioned when compared to others.

Which system is most reliable?

While the two grading systems bear some resemblance to one another, in the parameters that are assessed, it is arguably the AGS which places a more stringent guide on what is termed an Ideal cut. The GIA equivalent ,the Excellent cut, however is not to be scoffed at. Many people have a difficult time discerning the nuances of cut grade at the very highest grade levels.

In the end grading diamond cut is an attempt to define a particular type of diamond light performance as the best. You can be sure that diamonds cut to either AGS or GIA standards will certainly be lively and be beautiful to the viewer. More importantly though is the personal connection that a certain diamond has to you. Always ask the question, "Do I like this diamond?" Using that as your guide you will always find the gem that speaks to your heart.